The Art Prints below are part of small editions.  They are all hand printed & coloured. Every one is unique as it bears the marks of the maker. An etching for example, involves making the etching plate and then the creation of each individual print is a time consuming process of cleaning, inking and then wiping the plate before running it through the etching press. Each one is printed with highly pigmented etching ink or artist's quality paint on high quality acid free paper.
​
An original artwork created by a print maker has the value that is inherent in all hand made things - unlike digital reproductions that are frequently referred to as art prints!
Shadows

To mark the 40th anniversary of the Belfast Print Workshop artist members were asked to create a work in response to one selected from the archive collection (40 Cubed Exhibition, The Crescent Arts Centre Belfast, October 2017).
​
The work that I selected was Untitled Dog by Basil Blackshaw. 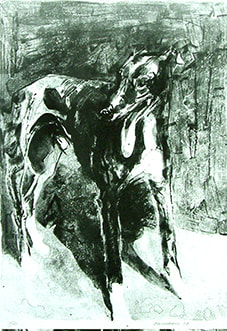 Basil Blackshaw, Untitled Dog (BPW Archive)
I choose Basil Blackshaw’s image of a lurcher drawn on lithographic stone. Blackshaw’s dog is recovering from a run, the ribcage is heaving and the tongue is hanging to one side as it pants to cool down. The intuitive marks reveal Blackshaw’s own familiarity with his subject. My own lurcher has the same stance, the same graceful shape.
My own work is based on a psychogeographical approach and the concept of the dérive. The dérive was originally associated with the Situationist International movement and is still employed by artists as a means of uncovering aspects of urban environments and their effect on inhabitants. It can take many forms but is essentially an unplanned walk, often with an initial theme but with the walker(s) remaining open to suggestions, mindful of happenings and employing some means to record the experience. In my work the dérive is central to looking past official depictions and to revealing hidden aspects of the city and its surrounds.
Blackshaw’s stomping ground was the hills, fields, hedgerows and lanes that surround Belfast. His views of the setting sun colouring the sky beyond Lough Neagh and rains plodding along the Lagan Valley before moving out across the Irish Sea are also mine. I have created a set of images in response to his based on a walk across Collin Mountain. It’s an area that featured in Blackshaw’s work and one with which I am very familiar having lived and walked my dogs there for over 20 years.
This walk was different in that I reversed roles of master and hound and followed the dogs wherever they led. I hoped that the route that they chose would reveal aspects of the landscape that had previously remained hidden in the form of images or concepts. Source material that I could include in the resultant set of images. This worked to an extent however the dogs often stopped expecting some guidance from me. During the walk I became interested in the shadows cast by the dogs and the concept of walking in the footsteps of others. I subsequently created a set of collographs based on shadows we cast. I felt that this was an appropriate response to the work of towering figure such a Blackshaw - the idea of working in his shadow. The shadows also provided abstracted shapes derived from representational forms that I felt were similar to those employed by Blackshaw in his art. 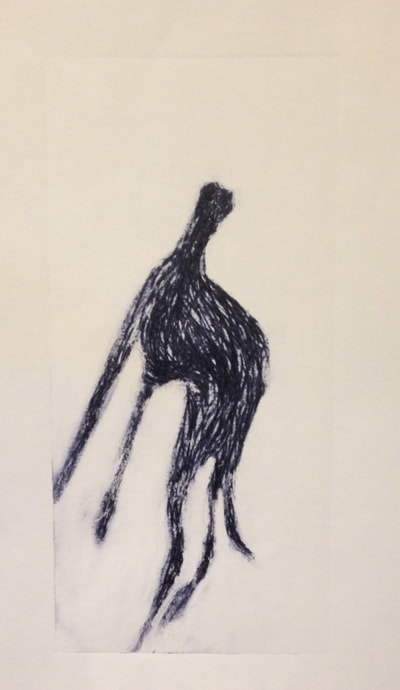 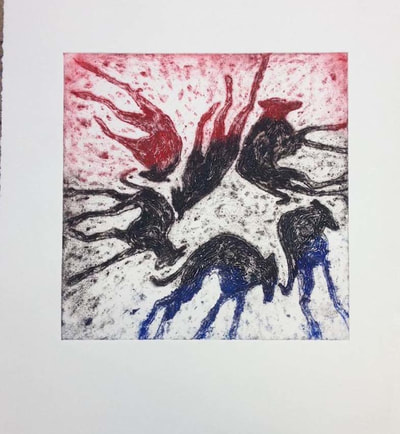 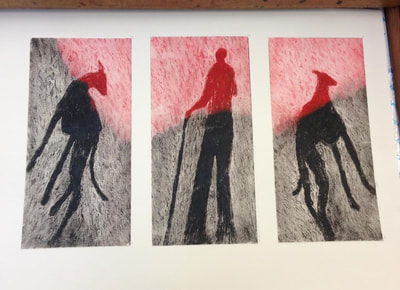 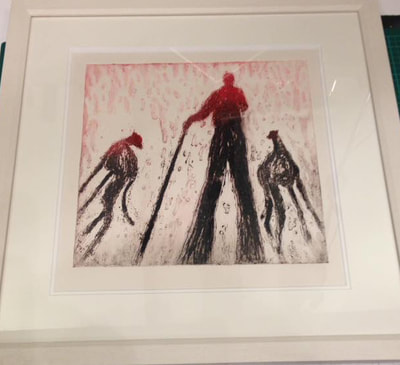 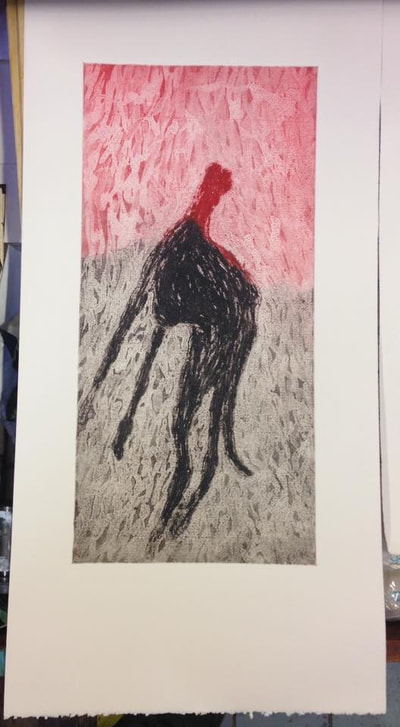 I created a map that combines Belfast topography with Manchester streets. I then drifted many miles across Belfast on the lookout for public figures. I have decorated the side panels of the map with sketches of figures that I encountered while walking and indicated their locations on the map. Anyone attempting to retrace my steps by relocating the Belfast figures to their equivalent Manchester setting may well get lost. Getting lost is the whole point of this map and others like it, because in doing so the walker may uncover aspects of their city that had previously been hidden. Getting lost however, is a difficult thing to do in an environment that you think you know. To counteract this familiarity the walker must employ a strategy to introduce some elements of chance. The purpose of this map therefore is; to disorientate the walker by misrepresenting well worn routes, and to disrupt the walker’s ingrained behavioural patterns by encouraging visits to random locations. So go and get lost Manchester!

The map is on display as part of the following exhibition
Loitering With Intent: The Art and Politics of Walking
July 23rd – October 14th at People's History Museum, Manchester

For more information www.thelrm.org for The Loiterers Resistance Movement

Finished image is a hand printed silkscreen. Each one is therefore unique costing £90 (including frame).
​Airport Road

During 2015/2016 I repeatedly walked along Belfast’s Airport Road and Sydenham Bypass. As the name suggest this area surrounds Belfast’s City Airport. It is a landscape reclaimed from the sea to provide space for industry, storage, offices and retail units. The stinking air is a mixture of sea breeze, tar, sewage, gas, diesel and other fumes. The roads are wide with deserted footpaths. It’s not pretty but it is interesting. This set of 4 silk screens considers some of the ways that people interact with this space.

Images are hand printed silkscreens. Each one is therefore unique costing £90 (including frame).
A Walk Across Belfast, 2016
​
I was delighted to be one of 16 printmakers selected from print workshops across Ireland to create a work in response to the 1916 Easter Rising. The full set of 16 images was exhibited in the Ulster Museum (June 2016) and in a number of other venues in Dublin, Cork and Limerick. My submission is a map of Belfast. The colours and shape are reminiscent of a tattered, bullet ridden flag. The map depicts a walk that I took across the city while reflecting on the influence that Belfast had on the events of 1916.

Image is a hand printed silkscreen. Each one is therefore unique costing £90 (including frame).

Some recent examples of my work from an ongoing series blurring the boundaries of town and country by using animal shapes to walk an urban environment.

Images are created from an etched plate finished in watercolour. Each piece is therefore unique with prices starting from £50 (including frame).

Images are either a hand printed silkscreen or created from an etched plate finished in watercolour. Each piece is therefore unique with prices starting from £50 (including frame).